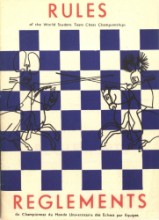 CHAPTER ONE - GENERAL RULES
Art. 1.
A tournament for the World Student Team Chess Championship (International Team Tournament) for Students will be organized in common with the International Union of Students (I. U. S.) by the federation affiliated to the International Chess Federation (F. I. D. E.) which has been entrusted with this task by the F. I. D. E. Congress at least a year in advance. In such a tournament, which should if possible be organized every year, each federation affiliated to F. I. D. E. will be authorized to participate with a team of national players, qualified by birth or by naturalization. The tournament will be played by the teams concerned in matches with four players from each nation taking part.
The travelling expenses of each participant will be defrayed by his national federation. To the expenses for board and lodging of each one of its players during the tournament every participating federation has to contribute by an amount of maximum 3 USA dollars per day. Beyond this, the expenses for board and lodging during the tournament and all organization expenses, including travelling expenses and hospitality for the chief referee, are to be defrayed by the organizing federation.
Art. 2.
Not less than five months before the commencement of the tournament, the federation entrusted with the organization of this event shall furnish the F. I. D. E. President with a draft invitation for this tournament containing complete information regarding the following details:

a) the names of the members of the team classed according to their playing strength; the order thus established is to be strictly observed throughout the tournament;
b) the name of the team captain who may be one of the members of the team;
c) any information required in respect of visa.
Each team is to be composed of four players as a minimum and of six players as a maximum.
This definite declaration of engagement should be accompanied by the following documents for each participant:

CHAPTER THREE - DETAILED RULES FOR THE TOURNAMENT
Art. 17.
F. I. D. E. Laws of Chess
The F. I. D. E. Laws of Chess must be strictly observed.
Art. 18.
Division into groups and drawing of lots
The division of the teams into groups and the drawing of lots will be carried out by the tournament director assisted by the chief referee (See also Art. 9 above)
Art. 19.
Order and Hours of Play
The order of play is so regulated that the matches are played according to the international tables of rounds (J. Berger), in such a way that the team whose number comes first has the white pieces on the boards 1 and 3.
If circumstances make it absolutely necessary, the tournament director can make such changes in the hours as he thinks fit. However, if before the last round there remain some adjourned games, these games must of necessity be finished before the last round commences. If there are adjourned games belonging to several preceding rounds, termination must be arranged in the order indicated by the international tables of rounds, unless obstacles of a practical nature are present.
Art. 20.
Rate of Play - Use of the Clock - Beginning of the Game
The rate of play is two and a half hour for the first forty moves and then 16 moves an hour. At the beginning of play the clocks are to show 3 hours 30 minutes.
As soon as the signal for the start of a round has been given, the clock of the player who has the white pieces is to be started by the player who has the black pieces. If the player who has the black pieces is not present at the prescribed time, the clock will be started by his adversary without the latter playing his first move. When the player who has the black pieces arrives, he starts the clock of his adversary and the latter plays his first move. If both players are absent, the steward starts the clock of the one who has the white pieces.
The game is lost by a player who appears at the chess board more than one hour late. If both players appear at the chess board more than one hour late, the game will be declared lost by both of them.
Art. 21.
Adjournment of a game (See Art. 15 of the Laws of Chess)
1. In case a game is not finished when the time prescribed for play, has elapsed the player whose turn it is to move is to write down his next move in complete notation on his score sheet, put this score sheet along with that of his adversary into an envelope given him by the steward, seal the envelope and then stop the clock. After this, the envelope is to be handed to the adversary who will act as prescribed in paragraph 2.
If the player makes the said move on the board he must write it down on his score sheet nevertheless.
2. The adversary of the player who has sealed his move is to inscribe on the envelope:

a) the names of the players and the countries they represent;
b) the position at the moment of adjournment of the game;
c) the time used by each player;
d) the name of the player who has sealed his move and the number of the said move.
3. When the writing of the information indicated in paragraph 1 and 2 has been finished, the envelope is to be handed to the steward who will put his signature on the back at the spot where the envelope has been sealed and give the envelope to the tournament director, who will be responsible for its safe keeping.
Art. 22.
Stewards
In addition to the duties incumbent on the steward according to Articles 15, 20, 21 and 23 he is particularly required to see that players observe chess etiquette and do not disturb or harass either their adversaries (for example by repeated offers of a draw) or other players (for example by assembling around a chess board).
Art. 23.
The Team Captains
The rights and duties of the team captains are as follows:
1. At least 60 minutes before the commencement of a round, the team captain must deliver to the tournament director or to the person delegated by the latter for this purpose, a written list in a sealed envelope giving the players of his team who will participate in the match of the said round. If such a list has not been submitted within the time prescribed, the team can only be represented by its players numbered 1 to 4.
The composition of a team, once submitted, can only be modified in the case of circumstances beyond its control in which case an explanation with reasons must be furnished. It will be for the chief referee to accept or reject any request for a change in the composition of a team by reason of circumstances beyond its control.
2. The captain is authorized, in his capacity as captain, to remain in the space reserved for the players, but it will be his duty to see that those of the team's players who have finished their games do not remain in the space referred to above.
3. At the end of play, the captain shall be responsible for reporting the result to the tournament direction as well as providing the latter with score sheets on which all terminated games are legibly recorded.
4. The captain must abstain from any intervention during play. He is, however, entitled to advise the players of his team to make or accept an offer of a draw or to resign a game, on condition that he does not make any comments concerning the actual situation on the chess board and confines himself to giving only brief information which can in no way be interpreted as an opinion expressed on the course of the game. Any communication between the captain and the players must be made under the control of the steward.
5. The captain is authorized to nominate a substitute but is required to do this in writing to the tournament direction.
6. Only the captain is authorized to present protests or any claims on the part of the players.
Art. 24.
Records and Reports
The chief referee is to draw up for each round a record on which is inscribed the result of each match and each game.
At the end of the tournament, the tournament director is to compile, on the basis of these records, a final record containing all the results, which record is to be signed by him and the chief referee.
The chief referee and the council of arbitration must moreover, each making a separate record, keep a record in which will be noted the questions discussed and decided, and the decisions and resolutions as regards the tournament.
At the next F. I. D. E. Congress, the organizing federation must make a report in writing on the organization and results of the tournament; at the same time the chief referee must communicate his observations.
Art. 25.
Penalties
If a player does not observe the Laws of Chess or the statutes and the directives given by the tournament direction, or fails in chess etiquette or does not behave correctly whether inside or outside the tournament building, the following penalties may be imposed:
- oral warning or written censure given by the chief referee or the chairman of the council of arbitration;
- loss of the game;
- provisional or definite disqualification of the offender, by a resolution of the council of arbitration.

CHAPTER FOUR - PRIZES
Art. 26.
Prizes for teams and individual players as well as special prizes will be offered according to an agreement between the organizing federation and the International Union of Students and at their expense. Before the start of the tournament a list of these prizes as well as of those offered by other donors should be published together with the conditions of their award. The council of arbitration is to ensure that these conditions are strictly observed.
It is recommended that individual prizes be awarded to the players who have obtained the best individual results calculated in percentage of the games played. At the award of these prizes account must be taken only of the results of participants who have played a considerable number of rounds.